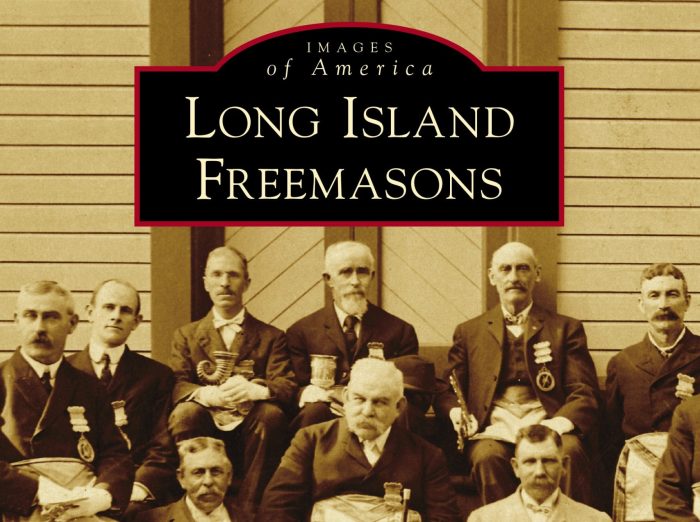 “One of the things that attracted me so greatly to Masonry, that I hailed the chance of becoming a mason, was that it really did act up to what we, as a government and as a people, are pledged to — of treating each man on his merits as a man.”

— Theodore Roosevelt to the Grand Lodge of Pennsylvania, Nov. 5, 1902

Many of us have been intrigued by the society known as the Freemasons but most know little about its history. Huntington Station resident Ronald J. Seifried has written Long Island Freemasons to offer background and anecdotes of this organization while still respecting its privacy. Seifried, a Freemason for over seventeen years, succinctly defines the Order:

“Freemasonry is a worldwide fraternal organization that is a system of morality, veiled in allegory and illustrated by symbols.  Formally organized in London, England, in 1717, Freemasonry initiates men from various professional and social backgrounds, well recommended, with a shared belief of a supreme being without prejudice of religious affiliation. A society with secrets, but not a secretive society, Freemasons forbid the discussion of politics or religion in the lodge, creating an atmosphere of harmony and removing any conflictive or divisive nature. Charity has been an important aspect and virtue of Freemasonry since its foundation.”

The introduction provides a brief history before focusing on Long Island’s connection to the association, which traces its roots to George Washington. Seifried then gives a detailed timeline of Long Island’s various lodges, some of which still exist today. He cites the challenges faced by the earliest members, including the traveling of great distances and economic struggles. His presentation is well thought-out and his research is a wealth of detail.

The book is rich with hundreds of photos. There are pictures of lodges and meeting halls, both interiors and exteriors. Seifried gives descriptions of the buildings’ histories and architecture as well as the costs of construction. Faith in the Freemasons’ goals has historically attracted generosity with many wealthy individuals and families donating money and land for lodges and their locations. There are explanations of lodge names, many of them obtained from Native American sources. Pictures of gathered lodge members give background on the individuals and their positions in the lodge. There is a mammoth amount of information in this slender volume.

The author acknowledges the enigmatic nature of the Freemasons:  “The secrecy of this group of men lent a certain level of mystery and respect when the members appeared in public. Schools were dismissed and locals turned out en masse to see the Masons parade.”  Often, this is the only time the community ever sees the members in their Masonic regalia. In addition, dedications were also public events and several images show these gatherings.

The book is divided into geographical sections: Central Suffolk; Western Suffolk; Oyster Bay; Town of Hempstead; North Hempstead; and Glen Cove.  Seifried finds what makes each area special to the group and offers a range of photos that pertain to the region. The final chapter touches on affiliated groups, including the Shriners, Eastern Star, and the Scottish Rite, among others.

There are intriguing accounts scattered throughout: “Part of a brother’s introduction into Freemasonry included a drama representing the building of King Solomon’s Temple, with chief architect Hiram Abiff as the central character, murdered for not revealing the secret word of a master mason; the lodges are often referred to as ‘temples,’ as an allegorical reference to King Solomon’s temples.” The Hawkins-Mount Homestead, in Stony Brook, was used several times in 1802 as a meeting place for the Suffolk Lodge; its owner, Major Jonas Hawkins, was a member of the Culper Spy Ring during the American Revolution. Chief Crazy Bull, grandson to the famous Sioux Chief Sitting Bull of the Hunkpapa Lakota Tripe, was a member of the Suffolk No. 60 Lodge, which is still located on Main Street in Port Jefferson.

Governor Franklin D. Roosevelt was invited to speak at Huntington’s Jeptha No. 494 Lodge, in commemoration of the adoption of the U.S. Constitution. He was late due to inclement weather and traffic and quipped that the island should be named “Longer Island.”

The color plates in the book’s center are striking. They have contemporary shots of existing lodges, explaining the various rooms. There are paintings that depict the three degrees of Freemasonry, offering a insight to the overall core of spirituality. The Long Beach No. 1048 Lodge’s stained glass window dome is photographed beautifully and the symbols are clearly explained.

Today, there are 28 active lodges across Suffolk and Nassau counties. Ronald J. Seifried’s Long Island Freemasons is an excellent look into the local history of the world of Freemasonry as well as a tribute to its survival and contribution.

Long Island Freemasons by Ronald J. Seifried, part of the Images of America series by Arcadia Publishing, is currently available online at www.arcadiapublishing.com, www.amazon.com or www.barnesandnoble.com.